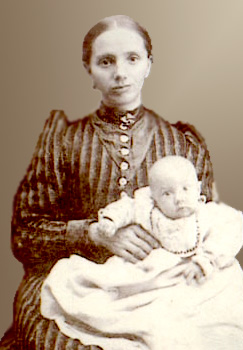 
Found her on a ship's passenger list age 24 with her sons Paul age 1 year 9 months and Arthur age 6 months. The ship Ems was traveling from Bremen, Germany to New York, arriving 11 Oct 1884.

Liberta was the first school teacher at the 'Ridge School', a Lutheran parochial school near Altenburg. She also kept in touch with relatives in Germany, taking her two surviving daughters back to Germany to visit in 1900.

She almost lived out her days on the farm in her son Ted's care except for the last weeks she was with her daughter Hattie in St. Louis. She died there and as buried at Immanuel Lutheran Cemetery in Altenburg, MO - Richard Finger

Her name is listed as Erdmuthe Liberta Finger on her son Arthur's birth record.