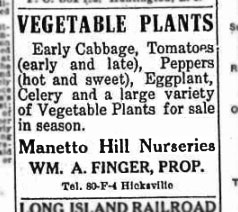 He had 2 brothers Otto, and Frank, and a sister Emma.

Found him on the 1910 Oyster Bay, Nassau, New York census (dist 1132 img 24) as William A Finger age 50. Florist and Farmer. Also in his household are Everett Wright age 4 and Howard Wright age 2, grandsons. (William and his wife raised these boys because his daughter Clara, their mother, died in 1908.)

Found him on the 1920 Oyster Bay, Nassau, New York census (dist 68 img 26) as William Finger age 61. Florist. His grandsons George E Wright and Howard Wright are living in his household.


William A. Finger, Sr. died at his home in Bethpage Tuesday at 2 P. M., at the age of seventy-four years. He had been in ill health for the past seven years. He came to this country from Germany fifty-three years ago, making his home first in Burlington, Vt., where he conducted a florist business. After his residence there he moved to Plainview where he lived for forty-five years, until the time of his death. He was in the florist and nursery business under the name of Manetto Hills Nurseries "The Home of the Dahlia".

Politically he was a Democrat and was at one time Receiver of Taxes and was also School Trustee in the Plainview District for over twenty years. He was also Democratic District leader for a number of years.

Eleven years ago he lost his first wife and later married Miss Julia Freund. She survives him as do also one-brother, Otto, of Brooklyn, and three children, Francis G., of Cold Spring Harbor; Mrs. Hattie, wife of Henry Moddle of Huntington, eight grandchildren and one greatgrandchild; born a few days ago. Funeral services and interment took place Thursday. - The Long Islander Oct 37, 1933

"Just because a man takes a bath in a horse trough on his front lawn early in the morning is no sign that he is of unsound mind — even if the bath is taken in the nude, for who takes a bath if he isn't in the nude?"

With these words, Surrogate Leone D. Howell yesterday directed a jury to bring in a verdict upholding the will of William Finger of Bethpage which was contested on the grounds that the testator was of unsound mind.

The testator's widow filed the petition for the probate of the will, involving an estate of about $1,000. The will was dated October 11, 1922, and Mr. Finger died October 24, 1933. Mr. Finger's descendants by his first wife contested the will which left the entire estate to the second Mrs. Finger. The contestants - were: William Finger, Jr., Hattie F. Moddle, Frank Finger, children of the testator; Everett Wright and Howard Wright, grand children. - The Nassau Daily Review July 18, 1934