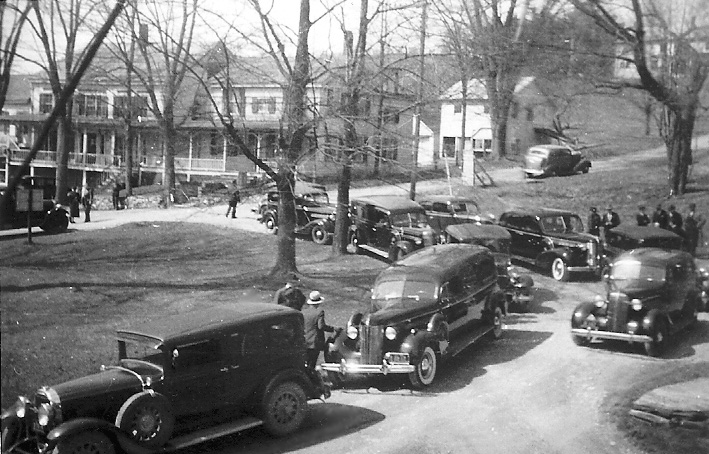 In October of 2011, we received this picture from Al Durant*. He mentioned that on the back of the picture was written: TRIPLE FUNERAL, EDITH JEWETT, JENNY FOWLER & MABEL FINGAR, CANAAN, NY. He did a search and found our website. From there, we did a little digging and found that Mabel Fingar was Mabel Bither, born in 1893 and was married to Percy L. Fingar born in 1893.

But he and I both wondered how it came to be a triple funeral. A little further research was done and we located this newspaper clipping from The Chatham Courier of April 21, 1938. The text is reproduced below:

The most ghastly catastrophe to befall Chatham in the past 35 years at least, snuffed out three lives shortly after 11 o'clock Monday night when a Boston and Albany passenger train struck a sedan on Main Street crossing. Probably never before have local residents been called upon to witness a more awful picture than that of the three lifeless bodies of Mrs. Mabel Fingar, 44, of Canaan; Mrs. Jennie H. Fowler, 44, of Canaan; Mrs. Edith F. Jewett, 48, of Canandaigua; after they had been catapulated from the demolished car in which they had been riding, and lay scattered not far from the grade crossing, one some 50 feet away. Percy Fingar, of Canaan, husband of one of the dead and driver of the illfated car, miraculously escaped with comparatively minor injuries. Soon after the crash he was rushed to Ghent Community Hospital where Dr. Oscar Wilcox, Chatham physician, treated him for multiple scalp and face lacerations and abrasions about the legs and hands. Numerous stitches were required to close the wounds, two of which were in an eyelid. He was allowed to return home that same night.

Climaxing the awful accident was a triple funeral for its victims this afternoon at 2 o'clock at the Congregational Church. Canaan, at which Rev. William T. Bartley, minister, officiated. The church was crowded far beyond normal capacity by the throng of friends and relatives of the three deceased, who came, still awestricken, to pay final tribute. All of the women had been Canaan residents for many years and were schoolgirl chums. All were either directly or indirectly related. While there was probably only one eyewitness to the accident in its entirety, several have been interviewed by Courier representatives who saw it at its various early stages.

Clifford Brundage, crossing attendant on duty at the time, the crossing being guarded by red and green traflic lights, relates the following details:

"I had switched the lights from green to red in anticipation of the approach of B & A train No. 49, westbound from Boston which is a passenger express and not scheduled to stop at Chatham. As the lights flashed yellow and then red I walked to my regular station some ten or fifteen feet from the switch post out into Main Street. At that time I glanced in the four directions from which cars can approach the crossing and saw none.

"I know that the lights were working and that they were red before the train made the turn near the Austerlitz street crossing and came into view on the straight stretch leading to the Main Street crossing, several hundred yards distant, to the northeast.

"As I stood at my post in the street my attention was attracted to the headlights of a car coming up Hudson Avenue, then at a point not far north of Maiden Lane, I watched the car approach the crossing at what I should judge was a normal speed. As it became apparent that the driver of the car was not going to heed the red lights, as he drove close to the south side of the crossing I frantically blew my whistle but it too was unheeded and the crash followed.

"Things happened fast after that and before I could move I was struck by a person flying through the air from the car. I was knocked to the pavement and as soon as I could gain my feet I rushed to the phone in my quarters a few feet distant and called the freighthouse for help.

"I didn't notice more than the one body, that which apparently had knocked me down, until some time after the crash. I did see a man wandering around in the street holding his head and I got the chair from my quarters and helped him into it."

Others who were close by at the time the crash took place were Perry Humeston, service station attendant, in his station which is only a few hundred feet from the crossing, and Ward Stone, of Chatham, who was walking near the State Bank directly opposite the crossing.

Humeston told the Courier that he looked out of the window in his station when he heard the deafening crash and saw the car, stopped on the west side of the tracks. He said the lights were red at that time.

Stone said the noise from the crash attracted his attention also and his first impression was of sparks flying from under the wheels of the locomotive and the car, still in motion, the rear end traveling clockwise, coming to rest headed west several feet from the tracks.

Those first on the scene said Fingar, talking incoherently stated, "I didn't see the lights or the locomotive." While Thomas Callahan, Chatham, could not be reached for a statement it is understood that he has stated since the accident that he crossed the tracks shortly before the crash and as he cleared the crossing he noticed the lights flash red. Fingar was rushed to the hospital in the ambulance of the Chatham Fire Department Rescue Squad after Dr. Wilcox had first examined him and ordered his removal. Grover Mather, captain of the Ocean Fire Company, Chatham, said he was in Main street when he heard the crash and sensing that it must be critical he raced to the firehouse and returned with the squad car. Dan Thompson was at the Morris Memorial nearby and assisted Mather.

When Sheriff Milton V. Saulpaugh, Sergeant Dewey Lawrence of the State Police, officers of the B.C.X, Sergeant Charles Potter of the railroad police, Coroner Clifford Leggett of Kinderhook, and Chief of Police Harry Mack of Chatham, had viewed the scene and started preliminary investigation the bodies were removed to the undertaking parlors of E. B. Gilford and Son, Chatham. The Chatham undertakers had charge of funeral arrangements.

Coroner Leggett said today that he will conduct on inquest as soon as Fingar, who is reported suffering from severe shock and injuries at his home in Canaan, recovers sufficiently to attend. Any decision will be withheld until after the inquest.

Sergeant Potter expressed his feeling that local judicial authorities have been too lenient with drivers who have run the crossing lights, in the years they have replaced the gates. He added that more numerous prosecutions where they are justified would tend to educate persons to be more cautious in approaching the crossing. He said as far as he can remember there has been only one conviction for such an infraction although numerous persons have been brought into court as offenders. Members of the Chatham Fire department, with the use of the pumper came to the scene of the accident sortly after 2 a.m. and flushed down the street, clearing it of the debris from the accident.

Mrs. Fingar, besides her husband, is survived by her parents, Mr. and Mrs. William Bither, of Canaan; a sister, Mrs. Ira Finch, Canaan; a brother, Henry Bither, Canaan; and her daughter, Delia Fingar, who is employed in the southern part of the state. Miss Fingar had phoned her parents that she would be home, at Canaan, to visit them the evening of the accident. 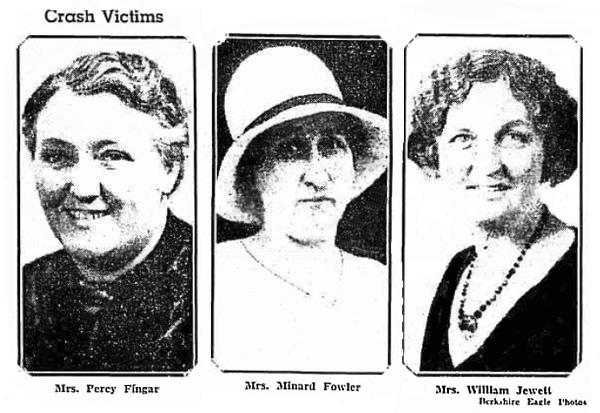 Mrs. Edith M. Jewett leaves her husband, Captain William Jewett, connected with the veterans' hospital Canandaigua; a brother, Minard E. Fowler, of Canaan; her mother, Mrs. Augusta Fowler, Canaan. She was visiting her Canaan home where it is said her mother has been ill for the past week.

It is understood that the party had been in Hudson attending a moving picture show and were on their way home when their car was struck by the train. It is the theory of many who have pieced evidence together as well as possible that it had been the intention of Fingar to take the Railroad avenue route thru Chatham to Canaan which avoids the crossing but that something had suddenly caused him to change his mind and that he swung the car suddenly across the tracks to go through Main Street. See map

Accidental death was the ruling given recently by Coroner Clifford Leggett of Kinderhook, in the triple train-auto deaths of Mrs. Minart Fowler, Mrs. Mabel Fingar and Mrs Edith M. Jewett, all of Canaan whose lives were snuffed out Monday night, April 18, at the Main St. railroad crossing of the B. & A. line, Chatham.

Following a formal inquest into the three deaths, held at the Court House, Hudson, April 28, Coroner Leggett reserved his decision until the testimony of trainmen, a Chatham watchman and the crossing attendant could be transcribed. District Attorney Edward H. Best conducted his questioning at the hearing. Basing his findings on the testimony, the Coroner ruled that Percy Fingar, of Canaan, widower of one of the crash victims and driver of car, was not criminally negligent in the deaths of the women.

Judge Robert G. Petrie granted limited letters of administration in the estate of the late Mabel Fingar of Canaan to a nephew, Walter Finch also of Canaan, in Surrogates Court Friday, Mrs. Fingar was fatally injured when the car in which she was riding was struck at the Main street crossing the night of April 18.


* Thanks to Al Durant for sending us this picture and giving permission to publish it.