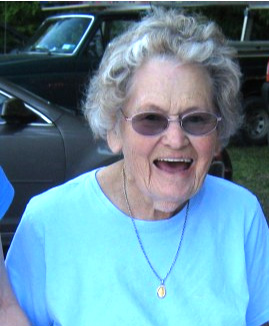 
Mary H. Fingar died on October 13th, 2012 at 90 years of age. She was born on April 13th, 1922 in Columbia County on Hull Road to Austrian-Polish immigrants Michael Hull of Bogdanowo, Austria and Marcella Pochodyniak of Rosochowaciec, Galicia.

Mary attended primary school at the one room school house located on County Route 8 in the town of Gallatin. Mary then attended and graduated from Germantown Central School in 1940. After high school Mary attended and graduated from Albany Business College. Mary married her husband, A. Howard Fingar, in 1943. She worked part time in the office of the family business, Sunnybrook Poultry Farm, while raising a family. After the untimely death of her husband in 1964 and the closing of their family business, Mary worked several jobs. In the 60's/early 70's she was a bookkeeper for the Town of Greenport during the terms of Supervisor Richard D. Mayne. After that Mary worked in the Hudson City School District Administrative Office for many years, learning computer skills in her early 60's and retiring in her early 70's.

She was a member of the Rosary Society of the Church of the Holy Cross and a volunteer at Columbia Memorial Hospital, volunteering in several areas, including the snack bar. She also volunteered at the Hudson Amtrak Train Station store/snack bar. Mary was an intelligent, articulate and vibrant lady with an engaging personality and sharp wit. One of Mary's favorite pass time was good conversation with a wide variety of people. She had a wealth of knowledge. She will be greatly missed.

Burial will be in Cedar Park Cemetery.