Some Notes Concerning Hugh Fingar and his Family

From his grandson, Larry Boddy

Hugh Fingar (Butch to his family) [born March 12, 1901] was a farm boy, the son of a farm boy and city girl. His parents' backgrounds couldn't have been [more] different. At the time of their marriage, they must have seemed an ill suited couple. The Fingars had lived in this country almost 200 years, while his maternal grandfather (whom he was named after) was a Scottish immigrant. Family legend states that Albert Fingar (Hugh's father) was the first person in the community to marry outside (a non-1710 Palatine German) of the community. Whatever their differences, they seemed to have a very happy (but unfortunately) short marriage as Helen (or, Ellen) died 1917.

About this time the family made the difficult decision to leave their farm home and start a new life in New York City. Al took a job at Bleeker's Dairy (as did Hugh) and so ended the bucolic life style of another American family that began long before they even came to this country. This move to the city also had an "up side", as it put Hugh in closer proximity to the young girl who had won his heart many years earlier, Myrtle Moore.

Hugh met Myrtle about 10 years earlier when her family moved to his community. Myrtle was born in Ohio [April 23, 1900], but moved when she was quite young. Her father had died in her infancy, and her mother (Mary Milligan) remarried James "Jamie" Taylor Petty. He was a bright man who studied law at Allegheny College where he graduated in 1888. Ironically, he never practiced law but rather became a newspaper man. He moved his ready made family east, first to New Jersey, and later to the Duchess County community founded by her future husband's ancestors. While Myrtle was soon smitten with her new beau, her parents didn't approve of the provincial locals. The Petty's maintained two homes, as Jamie's newspaper work kept him in the city, but a love of farming led him to keep a country place that was run by his wife. I suspect their life was somewhat unconventional. Jamie lived in the city on a full time basis, while Mary lived on the farm during the planting season, only joining her husband in the city for the winter. A decision was also made to have Myrtle live with her father during the school year to afford her the educational opportunities (not available in the country at that time) and help run the house for her beloved stepfather.

Though a good student, Myrtle (like many other young women of her generation) never finished school, and began life as a working woman. On February 10, 1922, Hugh and Myrtle went to the German Methodist Church in West New York, New Jersey where they were married. When I once suggested to my grandmother that they had eloped, I was quickly corrected with the line: We didn't elope, we just didn't tell anyone, as it was no one's business. Hugh then took Myrtle home, and went to his home with his father in the city. The next morning the newlyweds took the train to the farm to inform Grandma Petty of the union. Not pleased with the news, she promptly sat down and wrote a letter to Jamie to discuss the matter. 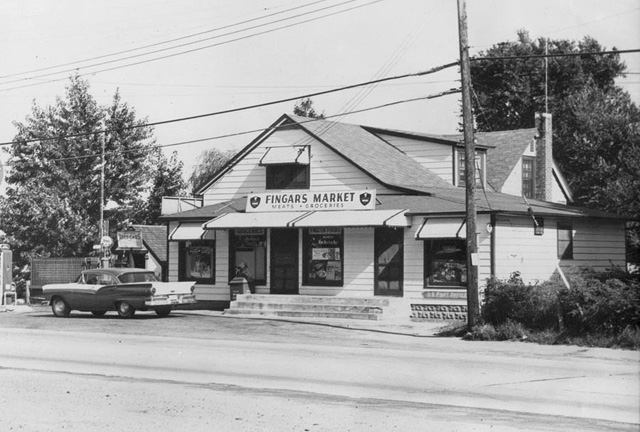 My grandandparents ran a small grocery store in Coram (Long Island, New York). They found the store on a chance stop on their way to Montauk Point in 1934. They liked the store, found out it was for rent and decided to become business people.

The store became profitable, and my grandfather never forgot his humble roots. When people asked for credit he found it impossible to say "no". Years after he died my grandmother would say how annoyed she got when he extended credit to people who already owed them money. His comment would be How can I say no when they have no money and ask for milk? My grandmother would comment that they had money last week when they bought liquor down the street. My grandfather would just say I can't say no when I know they have children at home. I suspect that my grandmother would have been the soft touch if she didn't know that her husband would beat her to it, as she always told the story with great pride.

When I was an infant my grandfather was president of the Coram School Board. This was before the centralization movement of the early 1960's, and in the post war population boom the 2 one-room schoolhouses that had served my mother and her brother and sister were no longer adequate. It was at this time that the Coram School on Coram-Mt. Sinai road (that is still in use) was built. At the time the building provided a classroom for each grade and was a great source of pride to the growing community. At the formal opening of the building my sister Cheryl was selected as a representative of the community to open the building. When my grandfather died in 1956 that school was closed for the day in his honor. A tree was also planted on site in his honor.