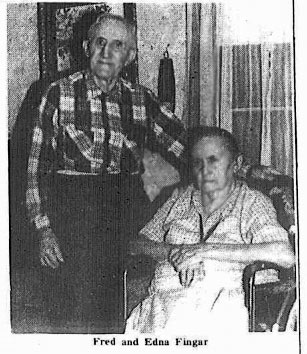 Found him on the 1900 Stanford, Dutchess, New York census (dist 41 img 31) as Frederick J. Finger age 7. He and his widowed father, John are boarders in the household of Robert D. Smith age 42, farm laborer.


Sunday, Oct. 3rd Mr. and Mrs. Fred Fingar were honored at a reception held at the First United Presbyterian church. Open House was held from two to four p.m., when friends and relatives came to extend congratulations on their 50th wedding anniversary. The Rev. Paul Orison spoke on behalf of the members of the congregation, of which they have been members for many years, Mr. Fingar having served close to forty years as Deacon. Mr. and Mrs. Fingar were married in Poughkeepsie Sept 30, 1915, by the Rev. Franklin Elmore, of the Baptist church. Mrs. Fingar was Edna Shook of Pine Plains, daughter of Mr. and Mrs. Leander Shook Mr. Fingar a son of Mr. and Mrs. John Fingar and was born in Jackson Corners. They have resided in Pine Plains 50 years, Mr. Fingar coming here from Stanfordville where he had resided for about 15 years prevlously.
Mr. Fingar is an employee of Samuel Deuel, Inc., where he has been for forty-two and a half years. The Register Herald October 7, 1965

Mr. Fingar is survived by several nieces and nephews. Memorial donations may be made to the Pine Plains Hose Company Building fund or to the Memorial Fund of the First United Presbyterian Church, Pine Plains, N.Y. 12567. Arrangements were under the direction of the Peck & Peck Funeral Home, Main Street, Pine Plains. The Register Herald December 19, 1985 page 9