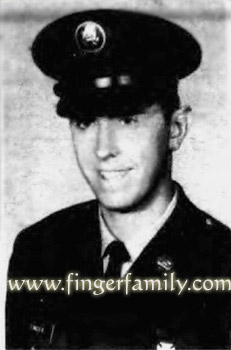 
He is referred to as 'Cpl. David Finger who is stationed at Ft. Benning, Ga' in his grandparents' Golden Wedding anniversary announcement. - The Hamburg Sun April 23, 1969


Private First Class David H. Finger, U. S. A. of North Boston was buried with military honors on Saturday in SS Peter & Paul Cemetery following a Requiem Mass in SS Peter & Paul Church here. Private Finger, the first Boston man to give his life in the Vietnam conflict, was killed when he stepped on a booby trap while on combat patrol Aug. 6. He was 23 and the oldest son of Mr. and Mrs. Harold Finger of Eckhardt Rd. Friends paid their respects at the Donald M. Demmerley Funeral Home in Pierce Ave. prior to the services. Private Finger's body arrived home last Wednesday night. Private Finger is the seventh Southtowns man to give his life in the Vietnam war. - The Hamburg Sun August 20, 1969


Boston Supervisor Jack Sedovy announced that 137th District Congressman Jack Kemp will officiate at the dedication ceremony of the David H. Finger Memorial Flagpole and Monument to be located at the Boston Town Park.

David, the son of Mr. and Mrs. Harold Finger and brother of Karen, Daniel, and Thomas Finger of Eckhardt Road in the Town of Boston, was the recipient of the Purple Heart, the Bronze Star for meritorious service and the Silver Star for galantry in action in the Republic of Viet Nam on the sixth day of August 1969.

Pfc. Finger earned the Silver Star on the day he was killed. Serving in the lead position for a platoon operating in the A Shau Valley of South Viet Nam, he noticed some movement in the foliage ahead. Disregarding his own safety he advanced and killed two North Vietnamese snipers waiting to open fire. Further ahead he knocked out an enemy bunker with hand grenades but was killed in the process by enemy fire.

He was 23 years old. In his senior year in high school, he was voted most valuable player of the Eden Varsity Baseball team. He played third base with the Boston Town team that won four Western New York suburban championships. A sportsmanship award is presented each year by the Boston Baseball Athletic Association to the athlete who best exemplifies the virtues of sportsmanship, dedication and fair play as set forth by the life of David Finger.

The inscription on the David Finger Memorial Sportsmanship Award reads as follows, 'He served God, Country, Family and Friends so well'.

The Memorial Flagpole and Monument have been erected at the Boston Town Park on a hill overlooking the new little league football field. The dedication will take place just prior to the first football game ever played on the new field between Boston and Gowanda. The dedication will begin at 2:00 p.m. Sunday. October 8, 1972. Friends and neighbors of the Finger family have generously contributed to the erection of this memorial to Dave's memorial. Special thanks were made to Paul Knox, Ivan Gillespie, Paul Schunk and Luke Fagnan for their special contribution to this cause. - Hamberg Photo News October 4, 1972 page 7.