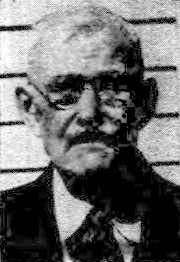 
Charles, wife Augusta, and son Gustav came to the U.S. in April, 1881 on the ship Gellert or Gallia.

Gustav Finger is his brother.


Olean in its pioneer days is well remembered by Emil Finger of 209 North Eleventh Street, who today is observing his ninety-second birthday anniversary.

Mr. Finger was born at Kreisabomich, Germany, on March 21, the first day of Spring, 1850. He located in this city in 1884 and was employed by the Socony-Vacuum Oil Company for many years, retiring in 1917.

The world situation today is keenly followed by the nonagenarian, who declares that with the United States in the conflict Hitler and the Japanese haven't a chance.

He had three sons in military service during World War I and one son, Fred W. Finger, who was stationed at Fort Dix, NJ, was awaiting word to sail overseas, when he was claimed by death.

His other two boys in service were William Finger, who now resides in Mt. Vernon, O., and Albert Finger of Hornell. Mr. Finger also has two daughters, Mrs. Harley Griffin [Ida] of Martin, Tenn., and Miss Clara Finger of Milwaukee, Wis., who is employed in the Veterans Hospital in that city. Both of his daughters are his guests for a few days. He also has a grandson, Harley Griffin, Jr., of Martin, Tenn.

Mr. Finger is alert, despite his advanced age, and is planning for the future by buying as many Defense Stamps as possible.

The newspaper and radio play vital roles in Mr. Finger's life these days and he is well-informed on national and international events "Sport", his twelve-year old dog, is his pal and obeys only one person — his master. - Olean Times-Herald March 21, 1942

Olean - The city's oldest resident, Charles Emil Finger, died at home last night one week before he was to observe his 96th birthday anniversary. He was born in Germany on March 21, 1850.

A veteran of the FrancoPrussian War of 1876, he came spent the remainder of his life in Olean. He was pensioned by the Vacuum Oil Refining Company in 1916 after 30 years service with the company.

Survivors include his daughters, Miss Clara Finger of Wood, Wis., and Mrs. Harley Griffin, [Ida] this city; his sons, Albert of Hornell and William of Mt. Vernon, O., and a grandson. Capt. George Finger and Sgt. Edward P. Finger of the Olean Police Department are nephews. - Jamestown (N.Y.) Post-Journal March 15, 1946