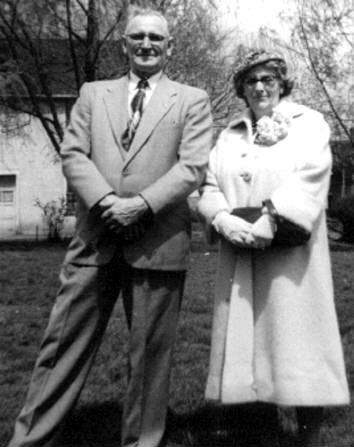 While working in the Pennsylvania oilfields with his father's oil drilling business, Victor Nenno, age 23, met Emelia Finger, age 20. As a result of the relationship between Victor and Emelia Finger, George was born on November 28, 1892. It is said that Victor and Emelia had married, but when revealed, the marriage was quickly annulled by Emelia's father August Finger.

Victor soon after returned to his home in New York state unaware of the fact that Emelia was pregnant. Victor later learned from one of his friends that Emelia had borne his son.

Victor returned to McDonald, Pa. and visited August Finger at his home. August told Victor that Emelia had delivered a child but it was stillborn. Victor returned home to New York unaware that Emelia had delivered George in good health. So that Victor would not find out otherwise, August had George live with another family in one of the surrounding farm communities for several years and did not file a birth certificate.

August took George as his own son giving him his last name. George did not appear on the 1900 census under August's household.

On the 1910 census, George appeared under August's household as his son and now being 17 years old. - from 'The Story of George Finger' as related by his son Robert Fingers... more (off site)

His WWII Draft Registration shows his birth as Nov 28, 1884. Perhaps this is a typo, since he lists his age as 47. The typewritten name on the card is George E. Fingers, but he signed it George E. Finger.